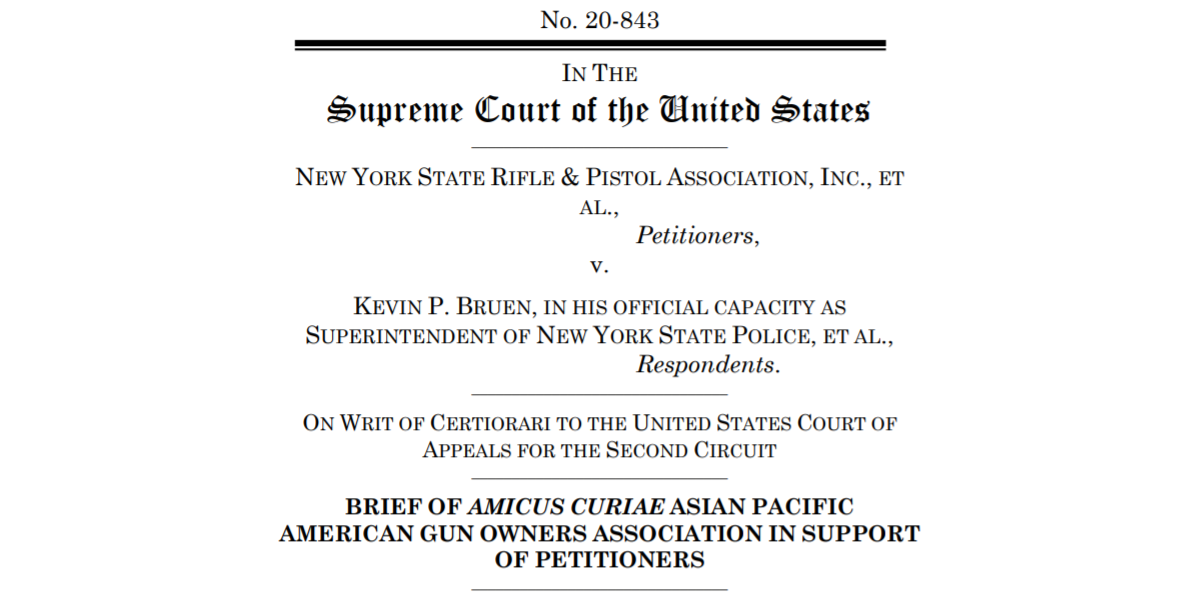 As listed in the cert petition (formally called the Petition for a writ of certiorari and available to view at the Supreme Court website), the key question in this case is “Whether the Second Amendment allows the government to prohibit ordinary law-abiding citizens from carrying handguns outside the home for self defense.”

This is an important case because its outcome can affect the inconsistent issuance of concealed carry permits across the entire country. As stated in the amicus brief that we filed:

[Asian Pacific Americans (“APA”)] “want nothing more than the ability to defend themselves against hate and violence, both within and outside of their homes. They have realized that law enforcement, despite its best efforts, simply cannot prevent many of these crimes from happening. Like other minority groups have historically done, APA give themselves a better chance of protecting themselves from harm if they exercise their right, protected under the Second Amendment, to bear arms whether at home or in public.”

During these oral arguments, questions from the Supreme Court Justices and other statements made can sometimes indicate what the decision may be. Here are two interesting quotes:

Justice Samuel Alito, in a discussion about the core right to self-defense asked Underwood “does it mean that there is the right to self-defense for celebrities and state judges and retired police officers but pretty much not for the kind of ordinary people who have a real, felt need to carry a gun to protect themselves?”

Justice Brett Kavanaugh, in a discussion with Underwood about concealed carry license hearings asks “why isn’t it good enough to say I live in a violent area and I want to be able to defend myself?” and later follows with “If it’s the discretion of an individual officer, that seems inconsistent with an objective constitutional right. I mean, what if you’re a runner and you say I run a lot, and, as you correctly pointed out earlier, there are a lot of serious violent crimes on running paths. It’s a real problem. Is that good enough?”

The NRA Institute for Legislative Action had this summary to the oral arguments:

All parties agreed, in other words, that the relevant question in the case is not if law-abiding Americans have a right to carry firearms in public for self-defense but whether there are sufficient precedents in American history for limiting that right as drastically as New York has.

The Right to Bear Arms Gets Its Day in Court, NRA Institute for Legislative Action

The Second Amendment Foundation provided an opinion on some of the things that could happen if the New York State Rifle & Pistol Association wins this case. Here is their description of one of the possible outcomes:

“…if the court finds the New York law unconstitutional facially – unconstitutional on its face. Eight other states have similar “show cause” laws: California, Hawaii, Rhode Island, Maryland, Delaware, Massachusetts and New Jersey. All of their laws would be impacted by such a decision.”

APAGOA will continue to keep an eye on this case and we will give another update when there is new information to share. A decision is expected around the summer of 2022.

Here are some other places to go to find more information about this case:

APAGOA will continue to keep an eye on this case and we will give another update when there is new information to share. A decision is expected in the summer of 2022.

Here are some other places to go to find more information about this case: